The City’s Fifty/50 Wheelie Bin Initiative, led by the Solid Waste Management Department, is using material from broken, past-their-lifespan wheelie bins to produce new ones. This has resulted in more than R18 million cost-savings and freeing up space at landfills, while contributing to the circular economy. Mayoral Committee Member for Water and Waste Alderman Xanthea Limberg visited the factory where the condemned bins are taken to be recycled as part of this intervention.

Over the past six years, the Fifty/50 Wheelie Bin Initiative has diverted more than 1,2 million kgs of condemned bins from landfill and recycled these to create new bins, resulting in an overall cost saving of more than R18 million.

These bins are identifiable by their grey, and more recently green, lids.

Inspiration for the initiative

The 240 litre wheelie-bin was introduced to South Africa during the early 1990s. Up until 2014 the City procured bins manufactured from 100% virgin high density polyethylene (HDPE) plastic. This material is hardy and durable, which makes it a good choice for hard-wearing items that are exposed to a harsh operating environment, but it is not biodegradable and, when it reaches the end of its usability, takes up a substantial amount of limited landfill airspace if not recycled.

The impact on the environment of using virgin material triggered an investigation by the Solid Waste Management Department into how the process could become more sustainable. Following this, the City produced a new, more environmentally-friendly tender specification for procurement, in which bins are manufactured from 50% recycled HDPE, known as Fifty/50 wheelie bins.

The new specifications required that the producer include HDPE material salvaged from condemned/past-lifespan City wheelie bins to manufacture new ones, thereby ‘closing the loop’ on a public procurement process, which has a substantial positive impact.

The department currently has more than 850 000 bins ‘in the field’, and eventually all City-issued wheelie bins will be replaced with the Fifty/50 version.

Over the past six years:

‘The Fifty/50 Wheelie Bin Initiative has seen more than a million kgs of HDPE diverted from landfill and incorporated into a circular economy – saving costs and landfill airspace, while cutting carbon emissions associated with the production of virgin materials,’ said Mayoral Committee Member for Water and Waste Alderman Xanthea Limberg. 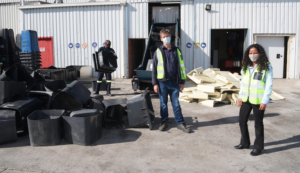 The initiative was the focus of a recent case study conducted by GreenCape, a non-profit organisation specialising in the green economy. The case study focuses on building a resilient city through circular public procurement.

In the case study, GreenCape noted that one of the many levers a city can implement to drive circularity at scale, is through implementing circular procurement.

‘Nowhere is this more evident than through the City’s Fifty/50 refuse bin procurement programme, which has leveraged its procurement policy to tangibly facilitate circularity at scale.

‘More specifically, the City has used circular procurement to not only meet its constitutional mandate to ensure its citizens have access to waste services, but has diverted waste from its own landfills, secured end-markets for plastic recyclers, secured offtakes to their own bin waste, created circular jobs and more importantly, secured businesses and the associated jobs offered, during a global crisis. All this without compromising price, quality, functionality, and longevity of the bins. All bins are also tested to ensure they comply with relevant standards,’ said Alderman Limberg.

‘The Solid Waste Department has demonstrated that beyond commitment to meeting basic service delivery requirements, there is a bigger-picture vision that drives innovation. I applaud our forward-thinking team who worked to make the Fifty/50 ambition a reality, and identifying that the solution was contained in the challenge,’ said Alderman Limberg.

More information about the City’s other waste minimisation programmes recognised at the PETCO awards is available here: https://bit.ly/32H2Q3H

A network giving all players, across all sectors, with the common goal of making a difference, an opportunity to do so.

PLEASE DONATE NEW OR GENTLY USED TOYS FOR BOTH BOY

Together, we have the power to Restore Our Earth.

Here's your opportunity to be part of the solution

Today is a day we get to celebrate women and their

GIVE A GIFT of LOVE & HOPE ⁣⁣ ⁣⁣ Help us r

TOGETHER WE CAN! ⁣ ⁣ On our last day of the @c

YES!! THOSE TOES ARE CONNECTED!😱😱😱⁣ ⁣

CHANGE DOESN’T HAVE to be PAINFUL!⁣ ⁣ ....bu

What are you doing to change the future?⁣ ⁣ On

Cape Town is burning! Our Firefighters and Wildlife need your help! 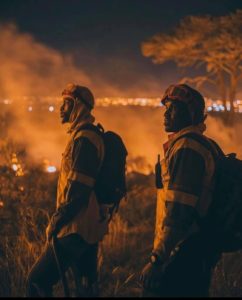